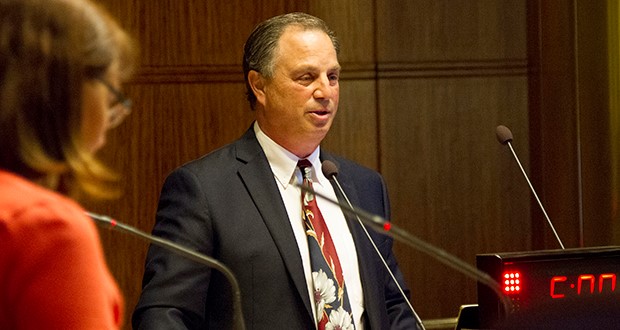 The St. Paul Zoning Committee lifted a proposed Major League Soccer stadium over two small hurdles Thursday, but not before venting some discomfort with the piecemeal nature of the approval process.

A preliminary plat for the 20,000-seat, $150 million-plus professional soccer stadium has been working its way through the city’s planning structure for several months and is on track for final approval by the St. Paul City Council on Aug. 10.

The project, which is to rise on about 16 acres near the northeast quadrant of Interstate 94 and Snelling Avenue, is also waiting for approval of a property tax break in a special session of the Minnesota Legislature that may convene in August.

If built, the stadium would be the home of Minnesota United FC, which currently plays its home games in the National Sports Center soccer stadium in Blaine. Last December, the team’s ownership group led by former UnitedHealth Group CEO Bill McGuire committed to building the St. Paul stadium. The team was awarded a franchise expansion with Major League Soccer in March 2015.

At issue Thursday were two variances for aspects of the stadium development that do not comply with St. Paul regulations. The stadium does not technically meet the city’s standard for high-density development at its proposed site, a former bus garage and land owned by the Met Council. Also, a recent reconfiguration of one of the streets on the site, Simpson Street, required action to designate a proposed stadium parking lot for stadium use only.

The city planning staff presented the variances for approval ahead of an Aug. 3 public hearing before the City Council. The Zoning Committee is a subcommittee of the Planning Commission.

Zoning Committee chair Gaius Nelson said he would have preferred if the variance request had been part of the team’s original development proposal.

“I think there has always been the concern that this has gone so quickly with such little detail in front of us that we’re exempting design standards,” Nelson said. “It makes it a little hard for us to understand what we’re getting.”

The variances do little to change the form of the stadium development proposal. The most significant change is a re-drawn Simpson Street. Simpson was previously planned to dead-end into a stadium parking lot from connections to St. Anthony Avenue and a proposed extension of Shields Avenue. It is now planned as a through street.

The new public right of way separates a planned parking lot from the stadium’s main property. The variance designates the parking lot — at the southeast corner of the project site fronting St. Anthony Avenue and I-94 — for stadium use only.

On the density variance, city planner Kady Dadlez said the staff recommends that the stadium’s low development density be given a pass as the structure is “unique” in how it sits on a site.

City regulations require that buildings constructed on that site meet a floor area ratio, under which the building square footage is equal to or greater than that of the property it is built on. Because it lacks a roof and has a soccer field at its center, the stadium falls 81 percent short of that mark.

“It’s almost like calculating the floor area ratio of a doughnut and not including the center part of it,” Dadlez said.

Representing the team’s ownership at the meeting was Jeff Shopek, a principal with Maple Grove-based civil engineering firm Loucks. He said intense development anticipated for the rest of the 34.5-acre redevelopment site in the 400 block of Snelling Avenue will more than make up for any deficiencies the stadium might have.

“Part of the stadium intensity is to help the surrounding development have a higher FAR,” he said.

In its unanimous approval, the committee included a caveat that requires the developer to apply landscaping and design standards in its master plan for the property to the parking lot. The approval moves the variance request on to the city’s Planning Commission. The item is on the commission’s Aug. 5 meeting agenda.

Mollie Scozzari, a spokeswoman for the St. Paul Planning & Economic Development department, said no construction work can occur at the stadium site until the city approves the preliminary plat and an environmental review. She said the review should be complete on Aug. 9.

Previous
Back to News and Events
Previous
Next